Diagnosing A Faulty Boiler Heat Exchanger [And What To Do Next]

Is your boiler making noise, locking out, or leaking? If so, you may have a faulty boiler heat exchanger on your hands.

In our guide, we’ll explain what a heat exchanger is, discuss some common symptoms and faults, and explain how to protect it from defects. We’ll also give you an idea of what a new heat exchanger for a gas boiler will cost. After reading, you should get a good indication of whether you need repairs or a replacement boiler. 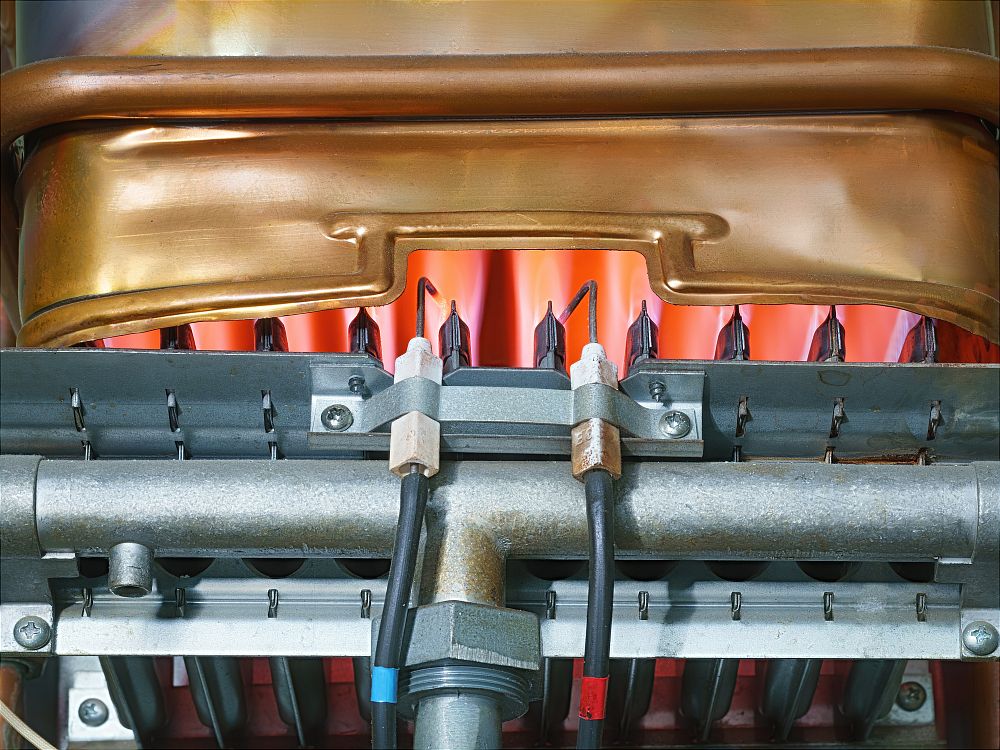 You can get repair quotes from local Gas Safe engineers here. And, if you’re fed up with your faulty boiler and would prefer a new one with a 10 year warranty, you can get an online price from Heatable extremely cheap.

What Is a Heat Exchanger?

First up: What is a heat exchanger?

Heat exchangers are devices that facilitate heat transfer from its source to another medium. They are present in air conditioners, power plants, swimming pools, fridges, and, you guessed it — boilers.

In gas boilers, heat exchangers transfer the heat produced by combustion to water. The water then feeds into the central heating system via a “flow” pipe. It circulates around the heating system, and returns via the “return” pipe.

As the water passes through radiators, towel rails, and pipework, it loses temperature. Then, as it enters the heat exchanger again, it’s reheated and the cycle continues.

The process works in a similar way for domestic hot water, which is kept separate from heating water. In gas combi boilers, a heat exchanger warms up cold water and distributes it to your taps, where you mix it with cold mains water to get your desired temperature. And if you’ve got a system or conventional boiler, the hot water will pass through a coil in the hot water cylinder, thus heating water for your taps.

Heat exchangers are typically make from stainless steel or aluminium. Stainless steel is generally viewed as a more reliable material, as it adds more protection against corrosion and physical damage.

Like any part in a boiler, the heat exchanger can develop faults.

Besides general wear and tear, there are 2 major things that cause heat exchanger problems:

First, head over to this map.

If you’re located in an area that is considered moderate or hard, there’s a good chance that limescale has built up on the heat exchanger.

Heat exchanger problems then emerge, and they are rarely cheap to fix.

Noises Coming From the Boiler

The first thing you might notice is unusual noises coming from your boiler.

This is a sign of limescale build-up that has created a “hot spot” on the heat exchanger. The noise you are hearing is steam bubbles from the water being overheated.

Your boiler is fitted with an NTC thermistor, which monitors the temperature of water exiting the boiler. When limescale accumulates in a heat exchanger, the water can overheat; the thermistor recognises abnormally hot water and locks out the boiler.

How to Fix and Prevent Limescale Build-Up

Book in a professional to fix the problem here.

Any faults with heat exchangers are bad news. Since heat exchanger repair costs can be upwards of £500, it rarely makes sense to spend that much cash on an old boiler.

Hopefully, you can catch the problem early enough. So, don’t hesitate — get a Gas Safe engineer to help.

You can also do the following to prolong the prevent limescale accumulation and prolong your heat exchanger’s life: 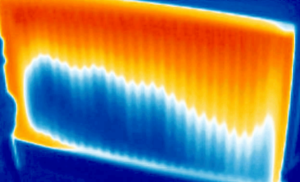 Central heating sludge is another type of debris that can affect a heat exchanger.

And unlike limescale, it comes from within your heating system, so all properties are vulnerable to it to an extent.

Sludge is the combined mass of rust and dirt breaking off from copper pipes, joints, radiators, and towel rails.

This gooey mess creates blockages throughout the heating system, and may cause a blocked heat exchanger.

Symptoms of Sludge Build-up in a Heat Exchanger

The noises that come from sludge accumulation in a heat exchanger are different from those caused by limescale. It’s more likely that the bits of rust are passing through, rather than attaching themselves to the boiler’s heat exchanger.

For this reason, instead of kettling, you’ll hear lighter sounds, such as:

Just like limescale build-up, sludge accumulating in the heat exchanger will cause a boiler lockout.

But this type of lockout doesn’t happen because of water overheating; instead, it’s a “water circulation” fault.

Essentially, bits of the sludge are restricting water flow, so the heated water isn’t travelling around the system as quickly as it should. If this is the case, the temperature difference between the flow and return pipes is above what it should be, causing the boiler to lock out.

If you’ve ever bled radiators, you’ll notice that after air is released, some water always comes out.

If the water leaving the radiators is black, that’s a sure sign of sludge.

And since this dirty water passes through your heat exchanger, you can be sure that it’s contributing to a blockage.

How to Fix and Prevent Sludge Build-up

That said, it’s still an issue that you need to sort out as soon as possible. So, you’ll need to get a Gas Safe engineer to help you:

Remember, each time you get your annual boiler service, you’ll want to ask the engineer to clean out the boiler filter.

The filter will only collect as much sludge as it can physically hold. Once it’s full, the sludge will stay in your heating system and find its way back to the heat exchanger, causing more problems.

Book in a professional to fix the problem here.

There’s unwelcome news when it comes to heat exchanger repair costs. They’re so prohibitive (in terms of both parts and labour), that it rarely makes sense to fix a boiler with heat exchanger faults. Here are the 2 different scenarios you can find yourself in:

A faulty combi boiler heat exchanger (or any other condensing boiler, for that matter) usually costs an arm and a leg to fix — especially if you’ve got a cracked one on your hands. We’re talking £400-600, depending on the model. For example, if you’ve got a Worcester Bosch, replacement heat exchangers cost around £500, plus labour.

So, if you’d rather not invest that much money into a boiler that’s on its way out, we’d urge you to consider a replacement instead. Using Heatable, you can get an instant, fixed online quote for a range of boiler models. Since Heatable operates almost entirely online, they have a small overhead and are able to pass on the savings to their customers.

To get a boiler quote from Heatable, you can fill in this questionnaire about your property and heating system setup (no personal information is required).

We compiled thorough guides to boiler problems for various boiler brands. You may find them a useful resource as you navigate your faulty boiler’s repairs or replacement:

Thanks for reading our 5-minute guide to problems with heat exchangers — we’re always happy to help.

If you have a question, please leave us a comment below and we’ll get back to you as soon as possible.