Whenever your Potterton boiler has problems with any of its components, its display will show you a range of error codes. These can be quite confusing.

That’s why, in this Potterton boiler troubleshooting guide, we’ll cover the most common issues, their associated error codes, and ways to get your boiler working again without delay. 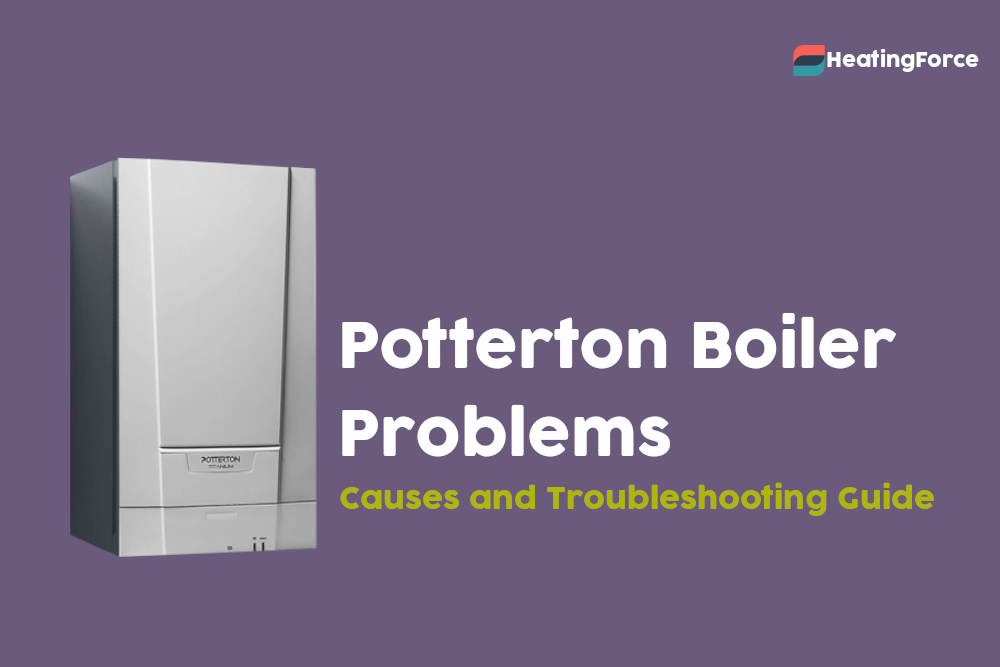 This is one of the most common Potterton boiler problems, but sadly, it plagues all boilers and hydronic heating systems out there.

And when boiler pressure is too low, your Potterton boiler will stop working and display a fault code. In this case, it’s likely that the E119 error will be displayed on Promax, Profile, Suprima, system and store boilers.

If you’ve got a Potterton Gold or Titanium, the error code showing should be E118.

Any leak in your central heating system will cause your boiler to lose pressure. 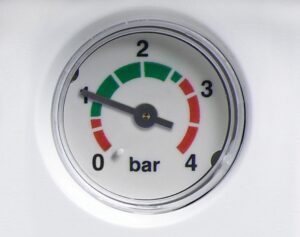 Leaks in the boiler can come from:

But leaks are not limited to the boiler. Any part of your heating could be the culprit, including:

If you’ve got the low-pressure fault code on your Potterton boiler, a reset button won’t fix the problem. The system will continue to leak, and once pressure is below 0.6 bar, the boiler won’t restart even after a reset.

Topping up the system pressure can clear the fault code, but it doesn’t solve the problem — the leak will continue, and may even cause water damage to your home.

You’ll need to find and fix the leak as soon as possible. Sometimes, this can be a small repair (like re-soldering a copper joint), but on occasion, boiler parts may need replacing (such as boiler pump seals).

Read our guide to boilers that lose pressure.

When you turn on your boiler, you’ll notice a small whirring noise that goes on for 2-5 seconds before the boiler fires up.

This is the boiler fan. The fan in your Potterton creates a draught that allows harmful flue gases to escape. The boiler needs to recognise the fan is operational before starting up.

The printed circuit board (PCB) gets this signal from an air pressure switch, which measures internal air pressure to determine if the fan is working.

So, if the fan isn’t recognised, or the signal is intermittent, the boiler will:

These boiler issues can be caused by a whole host of problems, so the boiler might display the wrong or misleading error codes.

However, it’s much more likely to display the E160 and E161 boiler error codes. These are fan specific fault codes for Potterton boilers.

What Causes a Fan Fault?

Like most boilers, fan faults like this on a Potterton can be narrowed down to the following boiler issues:

The boiler’s casing needs to be removed. And that’s a job for a Gas Safe boiler engineer.

Using electrical testing equipment, they’ll need to determine whether the fault lies with the:

Sometimes, repairing the wiring can fix the issue. In other cases, replacement parts will be needed. If the cost of repair exceeds £500, we’d suggest getting prices for a new boiler; a long warranty means you won’t be paying for repairs. You can get prices using this online form (takes less than 2 minutes and prices are displayed on screen).

#3 – Boiler Cycles Off Before Radiators are up to Temperature

Another common Potterton boiler problem is when the boiler heats up radiators but cuts off before they’re up to temperature.

If this is the case with your Potterton boiler, there’s a good chance there’s an E20 or E28 fault code being displayed.

This relates to the sensors that monitor the temperature of the water.

Once up to temperature, they’ll send a signal back to the boiler to say that the temperature is optimal, and to cut off the gas supply until water temperature drops.

If these sensors are faulty, they’ll be providing the wrong signals, potentially cutting off the gas supply before water temperature is optimal.

What Causes the Boiler to Cycle Off?

There are two culprits here:

NTC thermistors are temperature sensors. If they are faulty, they’ll provide incorrect readings to the PCB. However, on occasion, it’s actually the PCB that’s at fault.

Then there’s limescale. When limescale attaches itself to pipes and components, it burns hotter than other sections of the heating system.

So, if limescale has managed to attach itself close to the NTC thermistor, this will burn hotter than the rest of the water.

The NTC thermistor then assumes (incorrectly) that the rest of the water in the heating system is up to temperature, and cuts off the gas supply.

Get a Gas Safe boiler engineer to check the NTC thermistor. If it seems operational, there’s a good chance that removing limescale will fix the problem.

This can be done by completing a hot flush using chemicals. If the limescale has built up over years, sections of the pipework that contain the NTC thermistor may have to be removed and replaced.

A cold return pipe is a problem that’s not limited to Potterton boilers.

When a boiler ignites, it will take a while for the return pipe to heat up. Hot water comes out of the flow (so this pipe warms up within minutes).

After travelling around your heating system (where water will lose heat) it comes back into the boiler via the return pipe.

So, there will be a differential in temperature, but not a huge one. A boiler will display a fault code such as the E125 and E193 and then lockout.

What Causes a Cold Return Pipe?

Cold return pipes represent a circulation fault of some kind.

By that, we mean either:

This could be anything from blown seals, to the wrong pump, or even an incorrect speed setting.

Most likely, you’ll have a blockage from central heating sludge build-up. A typical sign of this is radiators that are hot at the top but cold at the bottom.

Sludge has made its way into the heating system, not been removed, and has settled at the bottom of radiators.

A Gas Safe heating engineer will need to remove the casing on your Potterton and assess the condition of the pump. Blown seals are easy to recognise, given the pump will be leaking if this is the case.

They’ll check the pump is operational, and its speed setting.

If this doesn’t fix the problem, it’s likely they’ll need to hot-flush your system with chemicals to remove heating sludge.

With old Potterton boiler models, like Promax, Suprima, and Profile, we get lots of people asking why they have no hot water in their taps even when the heating works.

On the flip side, a similar problem can occur, but customers have hot water, but no heat.

What Causes a Boiler Not to Provide Hot Water?

The problem isn’t limited to, but is usually associated with, a diverter valve that’s stuck.

A diverter valve essentially directs hot water to taps and showers, or your radiators.

On a combi, if it’s broken or stuck, it will only supply one or the other.

However, if the valve is partially stuck, you might get radiators heating up slightly, every time you turn on hot taps or run a bath.

Basically, hot water that is meant to be directed to your bath, shower or taps, is leaking through the diverter valve.

This isn’t the only problem that can cause your Potterton boiler to provide no hot water. So, it’s worth getting a qualified local Gas Safe boiler engineer in to help.

They’ll assess the diverter valve, and there’s a good chance it’s worth replacing, rather than wasting time trying to fit an old and faulty part. In some cases, a replacement boiler might be a better option, and you can get prices for one here.

This problem is common to all condensing boilers. When the condensate pipe — which drains the acidic liquid produced during the condensing process — freezes, your Potterton boiler will lock out and display the E133 fault code.

What Causes a Frozen Condensate Pipe?

Since the pipe leads the acidic condensate to the drain outside, it’s susceptible to freezing when outdoor temperatures plummet below zero. So, unfortunately, this is a problem that may just surprise you on the chilliest of winter days. Luckily, the fix is quite simple.

You can thaw the condensate pipe yourself by pouring warm (not boiling hot!) water over it. Once there’s no evidence of ice in the pipe, you can reset the boiler and it should hum along as if nothing’s happened.

However, if you’ve run into this problem once, you’ll probably experience it again. Most likely on the coldest of winter nights, when the last thing you want to be doing is thawing a pipe, outside, in your pyjamas.

So, the best thing you can do is upgrade your pipe and insulate it. If the one you’ve got now measures 21.5mm in diameter, upgrade it to the 32mm version and ask your Gas Safe engineer to lag it.

If you’re like many, you’re probably sick of sinking cash into your old Potterton boiler — especially if it breaks down often and is out of warranty. If this sounds like the situation you’re in, a replacement might make more financial sense than paying boiler engineers over and over to come and fix your appliance.

To explore your boiler replacement options, you can head over to Heatable’s online calculator and get a range of fixed-price boiler quotes on your screen in minutes. Heatable’s an online boiler installation company that has outstanding deals with several top boiler brands, so they supply Worcester and Viessmann boilers DIRT cheap. They also offer extended 10-year warranties, flexible financing, and fast installation service.