A diverter valve boiler fault is a common problem with older combi boiler types. Over time, a diverter valve can wear out or break, wreaking havoc on central heating systems. Fixing one may be simple, but costly — diverter valves aren’t exactly cheap.

In this guide, we’ll cover common symptoms of diverter valve issues, and give you an idea of what it takes to fix them. 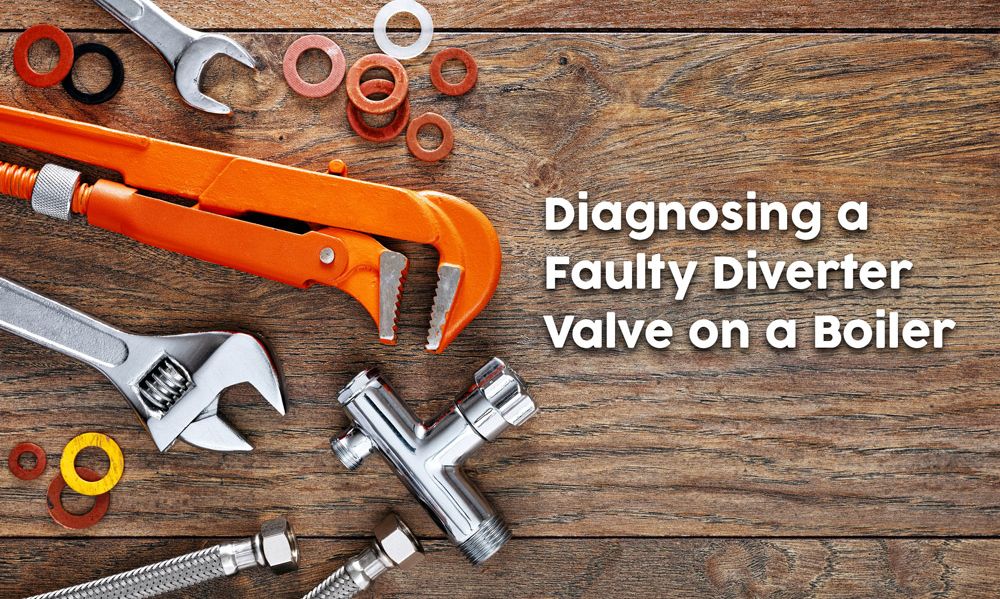 Fed up with paying for repair bills due to frequent boiler breakdowns? You can get a brand new Worcester Bosch or Viessmann boiler fitted by Heatable at very competitive rates — you can check your price here. Heatable are typically much cheaper than local installers, since they operate online and have streamlined their sales and acquisitions with major boiler brands.

Use Heatable’s anonymous online calculator (takes 90 seconds) to determine the most suitable boiler for your property.

What Is a Diverter Valve?

The diverter valve on a combi boiler works much like a lock on a canal — it opens and closes to control both domestic hot water and the water that heats radiators and towel rails.

Here is what a diverter valve looks like (this one’s from Worcester Bosch).

With combi boilers, the valve should always prioritise your domestic hot water (water from taps and showers) over your heating system.

So, when you switch on a tap, the diverter valve will close off the heating supply until you’ve turned the tap off.

Since a diverter valve is a moving part, a lot of faults stem from the valve sticking.

Luke-warm water in your taps and showers is one of the most common indications of a faulty diverter valve. Since the boiler should prioritise hot water, a valve that’s slightly stuck open on the heating side lets some of the heat (that is usually supplied to the taps and showers) escape.

If it’s a warmer time of the year and your heating is off, try turning it on and letting it warm up. Once it has, see if there is any hot water. If the temperature of the water increases after switching on the heating, this is another sign of a faulty diverter valve.

This is a common fault linked to a diverter valve. The diverter valve is likely stuck on the hot water side. So even though your hot water is a priority, the valve can’t open to allow the radiators to warm up at all.

We never advise trying to fix a boiler yourself; instead, we’ll urge you to call a Gas Safe engineer.

An engineer will run a fault check to ensure that it is a faulty diverter valve, and not something else.

There are other gas boiler issues that can show similar symptoms as a faulty diverter valve. For example, if you’re in a new property, or the problem has always been present, it could be something as simple as valves on the pipework not being open.

An engineer’s fault check will usually involve seeing that all controls are working correctly. If there is an issue with the diverter valve, the engineer will likely replace the whole diverter unit.

In many cases, it’s only the diaphragm that needs replacing, but labour costs usually make it worth getting a whole new unit. The last thing you want is to replace the diaphragm, and then have to call an engineer back in the near future because the valve itself is sticking.

Whilst the boiler is in bits, it’s certainly worth having the engineer assess the other visible parts for wear and tear. If there are no major issues, then the replacement of the faulty diverter valve is all that is needed.

When the diverter valve is faulty, and other expensive parts are on their way out, we’d suggest investigating the cost of a new boiler. For that, we’d recommend Heatable — they offer exceptional value for money and superb customer service. You can check Heatable’s prices by filling in this anonymous, 90-second questionnaire.

Expect to pay £250-350 to have a faulty diverter valve replaced.

Like every other aspect of a heating system, there’s a lot that affects the cost.

The Cost of the Boiler Valve Itself

Firstly, there’s the cost of the diverter valve itself.

A quick look over at Google shows us that valve prices fluctuate around £80-200.

If your boiler has a diverter valve that costs £80-120, £250 should cover the cost of the repair (including parts and labour).

The Cost of Labour for Diverter Valve Replacement

Hourly rates throughout the country vary. Being in a less expensive part of the UK, compared with say London, could make £50-60 difference to the overall repair cost.

Also, consider the ease of replacement. Some faulty diverter valves are easy to get to and easy to replace.

The quicker and easy the replacement is, the less it’s going to cost.

When You Shouldn’t Replace a Diverter Valve

Boilers that are 8-10 years old are certainly not as advanced as new boilers, and most already experience diverter valve problems at that age.

Get the engineer to check the rest of the boiler parts thoroughly.

If there is anything else majorly wrong with the boiler, it’s worth considering a new boiler. Find out the cost of a new combi boiler here.

Boiler manufacturers tend to offer warranties in the 5-10-year range, so you know you won’t have any problems during that time.