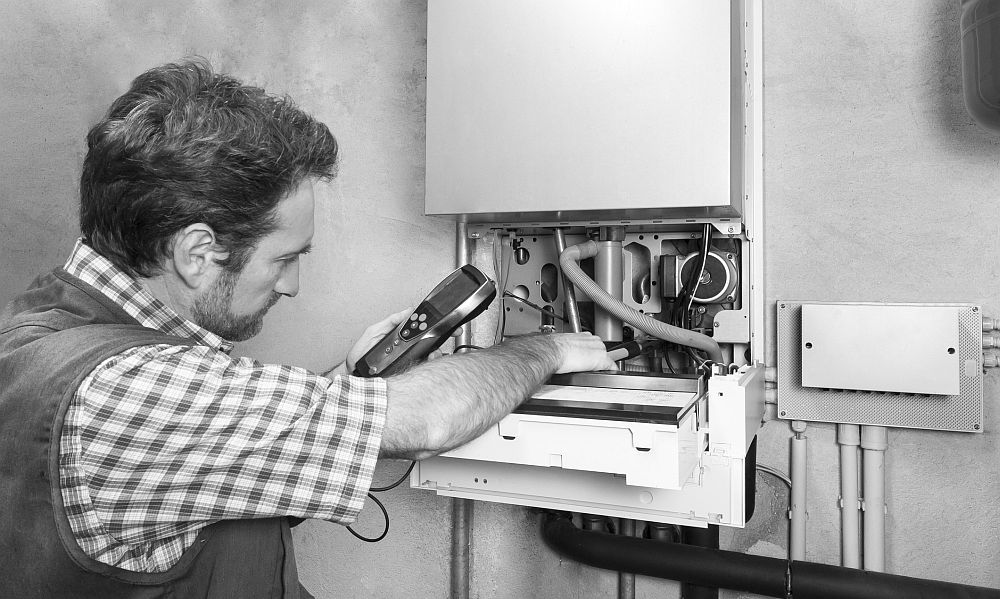 Read on to find out more.

Looking to get a new condensing boiler installed? We recommend getting some boiler quotes from Heatable. They’re a new kid on the block for online boiler installation, so they offer great prices for combi, regular, and system boilers from top ranges like Worcester Bosch Greenstar and Viessmann Vitodens.

Are you looking to buy a new boiler and wondering how much condensing boilers cost? The price (boiler costs only) is determined by a few things:

As an example, you could go with a 24kW new boiler from an unreliable brand that offers little or no warranty. That could cost as little as £500 upfront, but is most likely not to be a cost-effective solution long-term. Boiler repairs aren’t cheap ☹.

We always recommend buying boilers that have a minimum of 5-year parts and labour warranty; there’s plenty of choice. Below are some examples of condensing boiler prices, from boiler brands (and specific models) that we’d recommend.

But first, let’s start with what we think are the best condensing boilers, and their warranties, rather than specific boiler types, sizes and prices:

The price chart below is for 24kW boilers only, and gives you an idea of how prices directly compare across different ranges. There’s a similar price difference when moving to larger boilers, such as those with a 30kW output.

As you can see from the gas boiler prices above, Vaillant and Worcester tend to be on the higher end of the scale in terms of cost.

Ideal Boilers are some of the cheapest of the high-end brands. And, although Baxi are generally up there with the more expensive, their Baxi 600 is extremely competitive on price.

I wouldn’t go ahead and choose a new boiler just yet. As we’ve mentioned, it’s worth having an engineer come around and spec your property first — this is a crucial step in quoting material and labour costs for boiler installations.

Typically, we’d expect combi boiler installations to start around £1,800 for a cheap boiler, and upwards of £2,300 for something like a Worcester, including installation.

For bigger properties, the price for a gas boiler, fitted, is going to be £2,500 and beyond, even more if it’s an oil boiler (oil boilers can be £500-1000 more expensive than gas and LPG units).

There are a few ways to get the best deal on your new boiler.

The first, is to get fixed price boiler quotes online from a company like Heatable. You can get a top-shelf gas combi boiler, like a Worcester Greenstar Combi, complete with heating controls, installed below our £2,300 estimate mentioned above. And as a bonus, you’ll be able to finance your new boiler through Hetable, too.

But, if you prefer, you can get back-to-back comparisons from local fitters. By filling out this form you’ll be able to get up to 3 on-site visits and compare quotes.

Thinking about going with a national boiler installer like British Gas or Help-Link? We’ve created a detailed guide of what to expect in terms of price, in our guide to boiler installation.

What Size Condensing Boiler Do You Need?

If you’re all set on upgrading to a new condensing boiler, the next thing you need to figure out is what boiler size you need to suit your heating and hot water demands. Rather than rewrite something we’ve already written, there’s a quick guide to boiler sizes here. We’re going to assume you already know the boiler type fitted in your property (like a combi or a system boiler, for instance).

There are two key takeaways from the above article.

The first is that no property is the same. One 5-bedroom house isn’t the same as the next. You need to get a boiler installation company to come and spec your property and your heating system setup. Otherwise you could be overpaying for a boiler that has higher output than you need, or installing a new boiler that falls short in terms of hot water and heating output.

The second is a reference chart. You can get free quotes and an installer to spec your property here.

We can’t stress this enough — use this table only as a reference. Get a Gas Safe boiler fitter to come and spec your property. 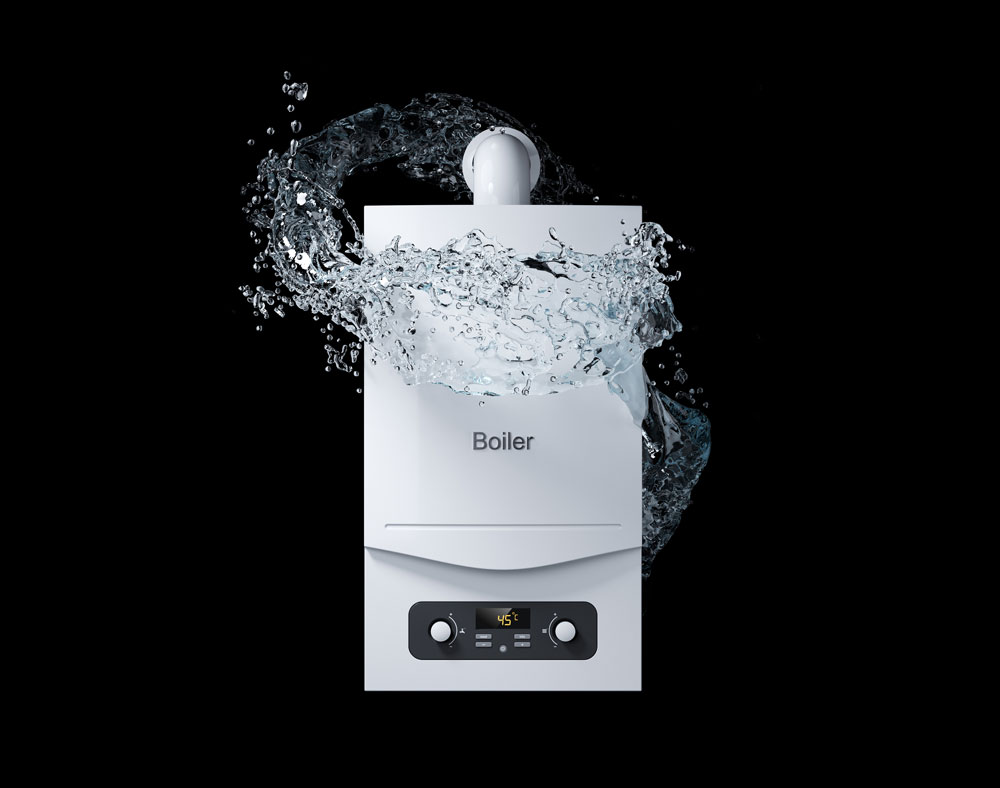 Here are answers to the different types of questions you might have.

What is a condensing boiler and how does it work?

To be clear — in accordance with the Building Regulations, all new boiler models in the UK are now condensing boilers. In fact, it’s no longer legal to install non-condensing boilers, since they’re far less efficient, burning more fuel and giving off more carbon emissions to produce less heat than their newer, condensing peers.

A condensing boiler burns fuel to heat water and also collects heat from the escaping flue gases. It’s this function that helps it operate more efficiently.

In a departure from traditional, non-condensing boiler systems, a condensing boiler has 2 heat exchangers. One of them heats water as the fuel combusts, and from there, the water circulates through the radiator network. As the cool return water re-enters the boiler, it passes through another heat exchanger where it collects heat from the escaping gases. This process produces condensate — which gets drained — and earns the device its name.

Mind you, the boiler only operates in condensing mode when the return water temperature is low enough. But the good news is that it still exposes water to a larger heating surface area, so it’s always more efficient than a conventional boiler.

How does a condensing boiler achieve efficiency?

Since condensing boilers extract the heat from flue gases rather than letting it escape, they operate way more efficiently than their conventional peers. By capturing this latent heat, a condensing boiler can recycle anywhere between 20°C-150°C of temperature that would otherwise be wasted.

That’s going to lead not just to a smaller carbon footprint, but lower fuel bills too (whether that be gas, oil or LPG). Because of their efficiency, the UK government now requires all new boilers to be of the ‘condensing’ variety.

Can condensing boilers help save money on energy bills?

Yes, they can. Around 55% of an energy bill is spent on heating, and if you’re looking to save money on home heating costs, upgrading to a condensing boiler is a great place to start.

A study on the Energy Saving Trust website shows you could save anything up to £305 per year by replacing an inefficient, non-condensing boiler with a new boiler that’s condensing. That’s for a detached house, and a boiler with a low energy efficiency rating (G). Obviously, savings drop for smaller houses, and those with newer, efficient boilers.

Here’s how much you can save on your heating bills by upgrading to a modern condensing boiler:

Depending where you fit into the chart above, there’s a good chance a new condensing boiler installation could pay for itself in the space of just a few years.

Are condensing boilers safe and reliable?

Yes, modern condensing boilers are both safe and highly reliable.

While condensing boilers do produce a visible plume, this only happens because the water vapour leaves the flue at a lower temperature than it would from a conventional boiler. The lower temperature of the vapour is what makes it more obvious. Apart from the aesthetics, however, there’s absolutely no harm in this plume — at least no more than you’d get from the exhaust of a conventional boiler.

Do condensing boilers need a drain?

Yes, condensing boilers need a drain. They have a second heat exchanger, which extracts latent heat from escaping flue gases, a process that leads to condensation. As the heat from the hot exhaust gets captured by the return water running through the heat exchanger, condensate forms and must be drained to prevent accumulation. Since the condensate is slightly acidic, your condensing boiler needs a special drain system that is not susceptible to corrosion. As all modern boilers on the market are condensing, you’ll have no trouble finding a suitable drain for your boiler.

RELATED READING: How to diagnose a faulty heat exchanger

No, the fumes emitted by a condensing boiler aren’t any more dangerous than those produced by a conventional boiler. They look different, yes. And that’s because they escape the flue at a lower temperature, which makes the water droplets in the vapour larger and more visible.

It depends on the type of boiler you’re getting — condensing combination, or combi boilers, do not need a water tank, whereas condensing regular boilers do. Essentially, being ‘condensing’ has nothing to do with whether a boiler needs to heat water and store it or is able to heat water on demand. All modern boilers in the UK — including models with and without a water tank — are now condensing boilers.

Do condensing boilers need a flue?

Yes, condensing boilers need a flue. Even though the exhaust gases get cycled through a second heat exchanger — which extracts their latent heat — they still need a way to exit the building. This is why all boilers that produce heat by burning fossil fuels (condensing or otherwise) need a flue. 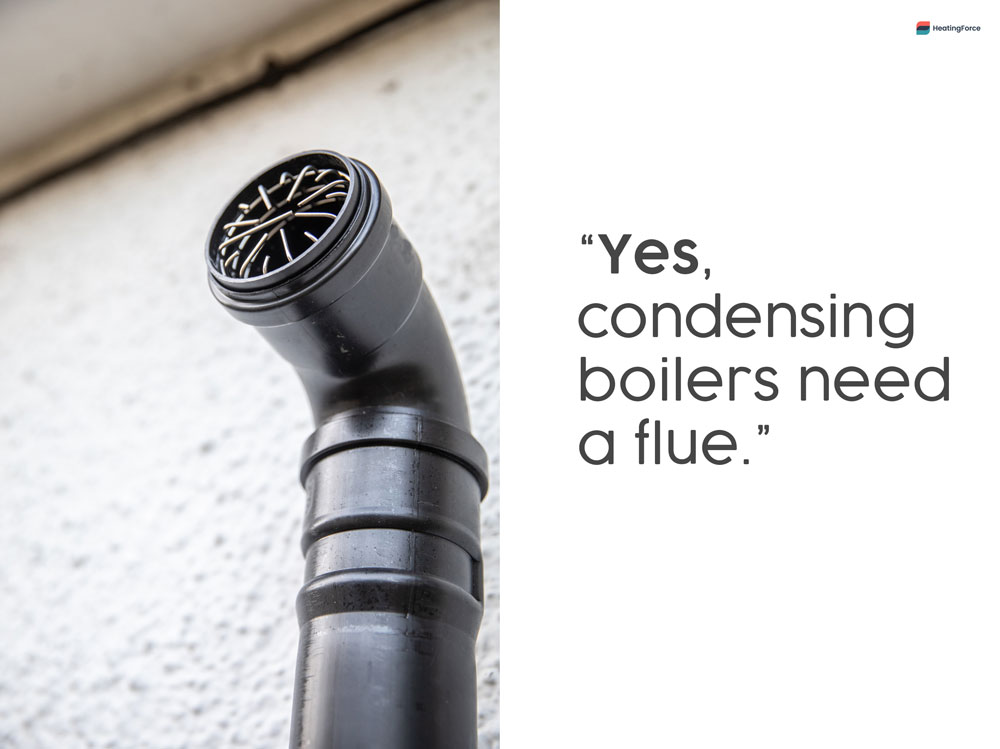 At what temperature should I set my condensing boiler?

Most condensing boilers have an indicator on their console, which shows the optimal temperature for the most efficient operation. Temperature matters because condensing boilers can only ‘condense’ — and extract flue gas heat — if the return water is around 55°C. From this point, the lower it gets, the more efficiently your condensing boiler will run. To lower the temps of the return water, you typically have to also make sure that the water leaving the boiler isn’t excessively hot either. This optimal supply water temperature depends on the size and type of your radiator network and the size of your home.

Thanks for reading out 5-minute buyer’s guide to condensing boilers. Hopefully, that’s enough information for you to start getting quotes for your new boiler.

Got questions about condensing boilers, prices, the best boiler manufacturers, or installation costs?

Leave a comment below and we’ll get back to you as soon as possible.