Power Flushing Costs [And Understanding if You Actually Need One]

The cost of a power flushing service is directly related to how many radiators you have.

The more radiators your central heating system has, the higher the cost. The only difference is the more rads you have, the lower the price per radiator. The question is, do you even need a power flush?

The Cost of a Power Flush from British Gas

It’s been mentioned that power flush costs from British Gas will be up to £800. They tend to be around 30-40% more expensive than local engineers.

A Power Flush Might Not Be The Best Route To Take

It’s easy to jump to conclusions. These are the signs most engineers look for when recommending a power flush:

The problem is. This doesn’t necessarily mean that power flushing is necessary, or the best option.

And I’m about to tell you why. First. Let’s quickly explain how a power flush works.

How a Power Flush Service Works

The internals of your central heating system (radiators, pipe-work) will deteriorate over time. And as they do, particles make their way into the water that flows through the boiler.

This can cause not just blockages in the pipe-work and radiators, but also damage parts in the boiler such as the heat exchanger. And that can be costly to fix.

Using a chemical kit and power flush machine, an engineer will force water through the system at a higher flow rate than your boiler usually operates at. Combined with the chemicals they add, this starts to break down these particles, and they’ll be expelled from the system.

But, there is a slight problem

The combined stress of chemicals and extra flow rate can put pressure on soldered joints, and in many cases, can result in leaks.

It’s not always a quick fix, as radiators are sometimes so clogged with sludge they either need a manual flush (so they need to be physically removed), or replaced altogether.

Inhibitor is a chemical that is added (and its levels should be checked and maintained) to your heating system. It breaks down particles in the heating system.

A scale reducer (or filter) will catch hard water particles. And a magnetic system filter will then catch magnetic particles.

If inhibitor is not already in the system, dosing the system should be the first point of call.

Sentinel is a leading brand supplying chemicals for boilers. They have an inhibitor test kit here.

#2 – What to do if inhibitor is none existent, or levels are low

Sentinel have a guide that shows you how to top up inhibitor and cleaner in a system. Realistically, you’ll want to speak to a heating engineer, as they’ll have the tools to ensure the right level of chemicals are introduced to the system.

*Quick note: I’ve seen a lot of talk on forums of people topping up their boiler pressure with the external filling loop.

If you do this regularly, you’re going to dilute the chemical content in your system. Losing pressure is not normal. It’s a fault, and needs to be checked out by an engineer.

Once an engineer has dosed the system with inhibitor and/or sludge remover, they’ll usually leave it a week and then drain down the system. This is a simple way to get rid of most of the sludge in a system without putting too much pressure on soldered joints (i.e. a power flush).

Sometimes pipework is too small, and not correctly routed.

I had this problem in a maisonette I purchased.

The pipework was 10mm (most systems will use 15mm) and the boiler had been moved from the opposite end of the property into the kitchen. There was also some “questionable” routing of pipework.

All this combined meant even with a manual flush, and a couple of new radiators, there was never a chance the radiators would get to full temperature. The routing of the pipe-work and size of pipes would not make it possible.

It’s worth showing the engineer the pipe-work to check there’s no obvious routing problems. As a power flush can’t fix something that is already broken!

In these cases, re-routing pipework (using 15mm) is going to be the best option. After dosing the system (mentioned above) and draining down, this is likely to solve the problem.

What a lot of engineers don’t suggest is this.

Let’s say a small system has 7 radiators and you’ve been quoted £375. And the price quoted is unlikely to guarantee fixing the problem.

A ball-park for replacements (cost depends on each size of radiator, whether new valves are needed and if there are any pipe-work alterations) is £750.

It’s a lot more expensive, but many manufacturers will claim energy efficiency improvements of 50% compared with radiators manufactured over 15 years ago. This relates to big savings on your energy bill.

If it’s only 1-2 radiators that are causing the problem, replacing those could solve the problem and work out cheaper.

#5 – Check Your Radiators Are Balanced

This might be clutching at straws, but there is a chance when the system was installed, the radiators were not balanced correctly.

This could be the problem if you’ve always had problems with certain radiators getting to full temperature.

It’s also the likely culprit if after draining the system (or seeing water come from the radiator vents), the system appears to be clean.

Radiators are balanced using the lock shield radiator valve. It should look like this. 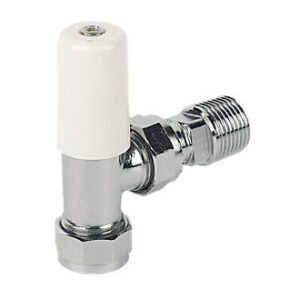 Once you remove the cap, you’ll see something like this. 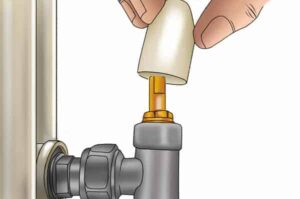 Ideally, you’ll have an engineer come and balance the radiators correctly.

If you have radiators not getting to temperature, you can open the lock shield valve slightly and see if the temperature increases.

Bear in mind increasing the flow to this radiator, may reduce flow to other radiators in the house. And if the valves are old and rusty, be extremely careful. These things like to leak!

One of the most common problems with boilers is loss of pressure. Without going into huge detail here, this can be due to:

Get a breakdown engineer to try and fix this issue first. As the problems your experiencing might be linked to the boiler and not a build-up of sludge in the system.

If the boiler is on it’s last legs, it might be worth considering a boiler replacement.

If you’re set on a power flushing service and understand the costs, a local engineer is going to be a lot cheaper than a national company.

However, before you agree a deal, make sure the engineer has done the necessary checks to ensure it is a power flush that is needed, and it’s not a problem with roots elsewhere (such as the boiler).

Any questions? Leave a comment below and we’ll do our best to help you out.