What Is A Conventional Boiler? (Comparison with Combi Boilers)

Confused about conventional boilers? Whether you want to learn how they function, compare them against other types of boilers, or find out their pros and cons – you’ve come to the right place. In this post, we will discuss all these things and help you make an informed decision before you buy or replace one. Here’s all you need to know about the UK’s traditional heating system. 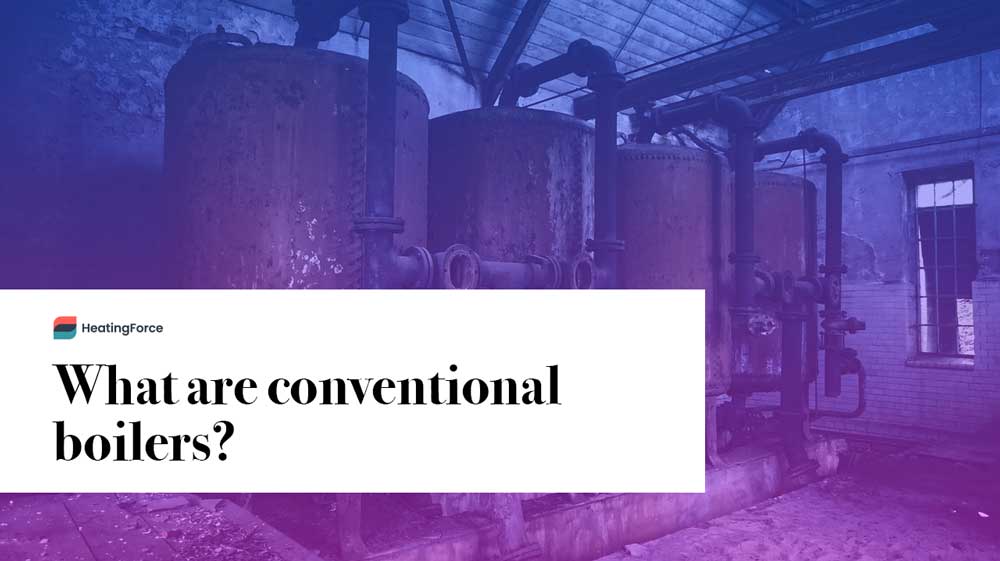 What is a conventional boiler?

Also known as heat-only boilers, regular boilers, and open-vent boilers, they are the once-favoured heaters that are still so symbolic of older homes. They serve hot water to both the wet central heating system and the home’s taps, and normally need 2 cold -water storage tanks, plus a hot water cylinder to run. Their tangled means of heat distribution and their size is what sets them apart from the more compact combi (combination) boilers and makes them less desirable. Although their fame is dwindling, conventional boilers are still available on the market and make a great choice for many.

How does a conventional boiler work?

A conventional, or regular boiler comprises several key components, all of which are needed to supply a home with heat and hot water. These are:

Here’s how all these moving parts work to heat your home:

Most newer boilers come with an expansion vessel to deal with surges of water supply in the home’s piping network. These are called “sealed systems,” and their boilers are dubbed “system boilers”. Where the excess water is sent to a feed and expansion tank, the system is referred to as “open-vented”.

These days, open-vented systems are suffering a decline in demand. That’s because storing water in an open tank leaves it bared to dust and other pollutants, which then end up flowing out of the home’s taps. These systems also call for more frequent cleaning to avoid debris build-up in the pipes. A sealed system, on the other hand, allows for better water quality, takes up less space, and needs less upkeep.

Whether the system is sealed or open-vented, its capacity to hold surplus water prevents the home’s pipes, pumps, and radiators from bursting.

What is a combi boiler?

Now that we’ve seen how a conventional boiler works, let’s take a peek at its newer, combi counterpart. After all, it’s their simpler means of operation and a smaller size that make them so much more attractive.

Like regular boilers, their combi variants supply heat and water to the building they serve. Their key distinction lies in a joint mechanism that links water and space heating. Unlike conventional boilers, combi units do not require water storage tanks. Their heat exchanger warms up the water that circulates the wet central heating system. Tap water is supplied on demand – the boiler’s secondary heat exchanger heats it straight out of the mains.

Because they heat water only when it’s needed, combi boilers score higher than regular ones on energy efficiency. Thanks to their compact size, they’re suited for smaller homes and take less effort to maintain.

On the downside, a combi boiler’s supply capacity is rather limited; so if you’re in the shower and someone flushes the toilet, you’ll know about it. That said, if the mains pressure is high enough and not all taps are on, combi boilers can still serve water at a fair pressure.

Which is best, combi or conventional boiler?

If you’re buying a new boiler, it’s natural to study all of your possible options. Now that you know how conventional boilers and their combi peers operate, let’s compare the two and give you a better idea of which one is the right fit for your home.

If you said yes to both, a conventional boiler may be the better heating option for you.

Why? Larger families tend to consume more water. Also, they tend to use more water at the same time. Conventional boilers are splendidly fit to provide generous loads of water at once. Those giant storage tanks up in the loft hold enough water to let your family cook, shower and wash clothes without fretting about water pressures falling to a drip.

That said, conventional boilers are massive. Which is why we asked the second, fairly urgent question: is your house large? Those very tanks that keep the water pressure high also take up tonnes of room up in your loft (so you better have a loft). The hot water cylinder, likewise, needs to be housed somewhere – typically, they are kept in airing cupboards.

To summarise: if your family has a consistent thirst for water, and your house is large, a conventional boiler may be the right choice for you. Even with a smaller home, you might make it work if you go with a systems boiler instead of a heat-only unit. Remember: systems boilers use a comparatively small expansion vessel for excess water and don’t need a second storage tank.

Combi boilers, on the other hand, are great if you prioritise efficiency and operating costs. Because they heat water on demand, less energy gets wasted keeping water hot. They’re a grand choice if you don’t use too much water at once and if your home is smaller than average.

Should I replace my conventional boiler with a combi?

If you have a conventional boiler, chances are it’s been there for ages, and a replacement couldn’t hurt. That said, you need to evaluate carefully your water and heating needs before you choose a replacement.

As we’ve pointed out before, large, busy households with myriad appliances guzzling water all day need concurrent access to lots of water to get sufficient tap pressure. If this sounds like your home, then those water storage tanks you already have are serving a vital purpose – they keep your water pressure high enough that you can carry on with your daily tasks. In this case, a new conventional boiler may be a better fit than a combi. Of course, you can use this chance to upgrade it to a systems boiler and free up some space in your loft.

Conversely, if you’re a family of 2 or 3, and your water use is moderate, then lower pressures may not be of concern. In your case, the conventional boiler is wasting too much power, and you’d be better off getting heat and hot water on demand. A combi replacement sounds like a grand idea! The swap would help cut your heating bill and free up some space in your home.

How much does it cost to replace a regular boiler with a combi?

Ah, that’s a tougher question. As you already know, the infrastructure differs sharply between regular and combi boilers; meaning, all your legacy piping, water tanks, cylinder, and the boiler themselves will have to be ripped out of your home. Along with them, expect some drywall to come down too. Then, a new network of pipes, and the new combi boiler, will have to be installed and attached to the mains. That’s if you want the new device in the same place; if you don’t… well, you can see where we’re going with this.

And that’s not all; there are still these often-ignored little details:

All said and done, you’re looking at a few days of disruptive work, and a bill that’s likely north of £3,000. Here’s HEATABLE’s estimate of your regular-to-combi swapping costs.

While the costs may seem steep, and the work too involved, the swap may still be advantageous if you just don’t need a regular or systems boiler; for instance, if you live alone or in a tiny household.

Can you still buy conventional boilers?

Absolutely, these machines are not yet obsolete. Many older homes are still equipped with water tanks, and lots of folks still buy these units for the reasons we’ve discussed above.

If you’re looking to buy a new regular OR systems boiler, check out Heatable’s guide by clicking here. You’ll see that prices are similar for the 2 brands they carry, Vitodens and Ideal Logic. What drives the price is the system’s power output: the more kW it can produce, the more you’ll pay, and that’s the story with all boilers.

If you’re considering a new conventional boiler to replace an old unit or to equip a brand-new home, don’t be put off thinking they’re dinosaur technology. Modern conventional boilers are state-of-the-art units that comply with current codes, and they’ll serve you well if you live in a large home with high water demand. So, if you feel a regular boiler is the optimal heating method for your home – go ahead and get one! And remember, you can still save some loft space by choosing a system boiler, which otherwise works just the same.

What are the pros of a conventional boiler?

Whether you have a regular boiler in need of replacement, or you’re aiming to purchase a brand-new one, we will help you weigh the pros and cons of these machines. Let’s start with the pros.

What are the cons of a conventional boiler?

Now, we’ve hyped up regular boilers quite a bit in this post, and you may rightly start to wonder why most people want a combi. Here are some less-than-appealing facts about these ancient apparatuses:

The traditional way of heating the UK’s homes may lack the popularity of the new combination boiler systems but still offers distinct advantages in some cases.

Large homes with busy families and high water needs benefit the most from regular boilers, as these heat and store vast quantities of water. Their users will still find hot water in their taps for some time if their boilers fail, or the power goes out. Likewise, those who consider installing solar panels may benefit from a compatible boiler system to augment their hot water and heating needs.

Those with smaller homes and less water use, however, would doubtless be better off with a combi. Check out the best combi here.