Welcome to our 5-minute guide to oil boilers that aren’t firing up for central heating and/or hot water. Below, you’ll find 8 of the most common oil boiler problems that lead to oil boilers locking out. And, our guide will also explain why you may have no hot water from an oil boiler but the heating is working.

Before we start, please note that resetting your boiler isn’t going to fix a lockout. The boiler may work for a minute or two, then go offline once again. Broadly speaking, a boiler locks out for 2 reasons:

A long story short, if you have a problem with an oil boiler, get someone that’s qualified to service it – don’t do it on a DIY basis.

Let’s start with the most obvious — if your boiler doesn’t have enough fuel, it won’t fire up.

Check your oil tank. Even if there’s sign of some oil in the tank, there’s a good chance your fuel supply is starved. That means it’s time for a top up (companies like Boiler Juice offer good deals on heating oil).

Likewise, if there’s any debris in the oil tank, a low supply means it’s all collecting at the bottom and restricting the fuel supply.

The next most obvious thing to check if your oil boiler is not firing up, is the pressure.

Typically, we’d expect manufacturers to recommend 1.3 bar. However, anything in the 1-3 bar range usually means your boiler will be operational.

An oil boiler with a pressure that’s too high or too low will lock out, and a reset won’t fix the problem.

If the boiler pressure is too low (below 1.3 bar), you’ll need to add pressure to the system. You can do this by opening the valve on the external filling loop (the braided hose below your boiler’s casing) and topping it up with water.

Before you do, read this guide to boilers leaking. If your boiler is leaking, you need to get someone to find and fix the problem. Simply topping up water to the system could lead to expensive water damage repairs in the future.

This is a frequent problem when it’s freezing outside. The condensate vents harmful gases in the form of vapours out of your property.

Unfortunately, these condensed gases are prone to freezing.

Generally, if it’s -2°C or below outside, there’s a good chance that this is the reason your oil boiler isn’t firing up. In fact, this problem is so common, that on a recent day when temperatures dipped to -6°C across the country, we had over 100 questions about boiler lockouts. Most of these were caused a frozen condensate pipe that could have been fixed in a matter of minutes, and on a DIY basis.

There’s a small pipe on the exterior of your property, that’s likely white and 21.5mm in diameter — this is the condensate pipe (note that some installers will fit larger condensate pipes in order to reduce the chance of it freezing).

All you need to do is use lukewarm water (hot water might crack the pipe) and thaw out the pipe.

Once the pipe is thawed, resetting your oil boiler should clear the fault code, and it will fire into life.

As we mentioned, there are precautionary measures you can take, such as fitting a larger condensate pipe and protecting it with lagging.

Fault codes related to RF (radio frequency) thermostat pairing issues aren’t often listed online. But if you notice that your oil boiler behaves like it’s got a mind of its own, there’s a chance that there’s an RF pairing issue. An alternative root cause behind a boiler that’s working intermittently is a faulty PCB — which we’ll discuss below.

You’ll need to find the owner’s manual for your RF thermostat. That manual will show you how to reset to default settings and repair your thermostat.

If you don’t have one, most manufacturers, like Salus, have manuals online. Just search “Name Of Thermostat”+”Manual”. For instance…”Salus RT500RF Manual”.

This is boiler problem is uncommon, but not unheard of: A thermostat being controlled… by the people next door!

Spooky. But if you’re on the standard frequency that your RF thermostat offers, and your next door neighbour has the same stat, on the same frequency, guess what happens?

Your house will be at the same temperature as theirs. Essentially, one thermostat will control another if it’s in range.

If you’ve noticed your heating switching on randomly after installing a new thermostat, there’s a chance the control inputs are coming from the neighbour.

Check with your neighbour and see if they have a similar thermostat on the same frequency. If they do, refer to the thermostat’s owner’s manual to learn how to switch to a different frequency.

Your oil boiler won’t fire up for central heating or hot water if the fan isn’t operational.

The fan works with the flue to push the gases from the condensing process out of your property. It’s a safety feature.

The printed circuited board (PCB) needs to know that the fan is working before it fires up your boiler.

So, if there’s a fault with the fan, your oil boiler won’t fire up – it’s as simple as that.

If you suspect that the fan is causing the issue, you’ll need to get it tested. We’ve covered boiler fan faults in detail here.

When testing the fan, it’s important to test the air pressure switch, too.

If it doesn’t recognise that the fan is working, it will send a signal to the PCB, and the PCB will shut the boiler off.

In fact, in your case, there’s a good chance the pressure switch senses that the fan isn’t working from start-up, which is why your oil boiler isn’t firing up at all.

Get an accredited OFTEC engineer to test the air pressure switch and fan in unison.

The printed circuit board (PCB) on your boiler is the brains. It controls electrical components such as the air pressure switch, fan, gas valve, and pump, and receives signals from all kind of sensors. 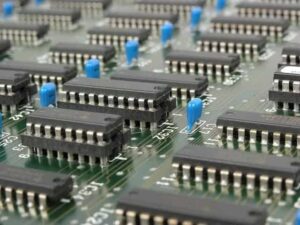 As soon as the PCB receives a signal that the boiler isn’t working correctly, it’ll lock out the boiler and display a fault code.

The fault code might be related to the fan, NTC thermistor, or even the pump.

Now, the problem is that a faulty PCB is hard to diagnose straight away. And that’s because the fault codes displayed may incorrectly point to other (nonexistent) issues with the boiler.

An OFTEC engineer will be able to investigate the fault code and see if it relates to a PCB fault.

They can then test the PCB on your boiler with a multi-meter — this ensures the PCB is getting power (we’ve written more on faulty boiler PCBs here).

Unfortunately, the PCB is the most expensive part on the boiler to replace. So, only replace it if:

Replacing 2-3 essential components can add up quickly. And if your boiler is old, it makes much more sense to get a quote for a new one.

No hot water from your oil boiler, but the heating is working?

The problems above have mostly dealt with full-on boiler lockouts. Now, what if you have no hot water from an oil boiler, but the heating is working?

If you find yourself in this situation, the likely culprit is a faulty diverter valve — a device that guides hot water to either the radiators or the taps. In the event that this valve has seized (or developed any other fault), it may be sending the hot water only to your central heating system, even if there is a call for domestic hot water.

The best way to confirm that a faulty diverter is behind your oil boiler problems is to get an OFTEC engineer to examine your appliance.

Thanks for reading our 5-minute guide to oil boilers that aren’t firing up.

We’ve created a boiler fault finding guide here. Feel free to bookmark it in case you have any problems in the future.

And if you still have a problem with your oil boiler, leave a comment below and we’ll get back to you as soon as possible.