Boiler Leaking Water? Here’s How to Fix a Leaking Boiler

Having a leaky boiler can be extremely stressful. Not only is a problem already visible, but a boiler leaking water is also likely to be causing damage to internal components and needs to fixed as soon as possible.

This article covers some common questions relating to boiler leaks. It will help you understand why your boiler is leaking, but also the solution to get this leak fixed.

Rather have a new boiler with a long warranty, and avoid breakdowns? You can get a new boiler fitted from £1,595 (on finance at low interest rates if needed) from Heatable. You can get your price on-screen in less than 90-seconds using this form.

Please bear in mind, to get your leaky boiler repaired, you should always use a Gas Safe engineer. 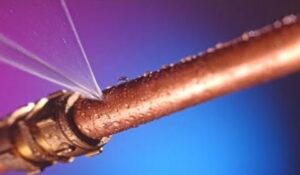 My boiler is dripping slowly, why?

A common cause of water dripping slowly from a leaking boiler is a failure in the expansion vessel, or water dripping from the auto air vent in the boiler.

Can a leak come from internal parts, or the central heating pump?

A common fault that can cause a boiler leak is a cracked heat exchanger. The water can escape via the crack.

If this isn’t the case, it’s worth checking to see if the pump is secure. Sometimes boiler pumps can work themselves loose and this creates a leak. In fact, even if they are not loose, over time the seals can degrade and this could be the source of the leak.

If the pump seals are causing a boiler leak, should I replace the seals, or the whole pump?

The difference in cost between a pump and just pump seals isn’t as much as you might think.

Taking a quality Grundfos pump as an example, the difference might be £60. OK, it’s £60 saved (you might think).

My boiler is leaking heavily, what can I do?

Bear in mind that its likely to continue to leak until excess water drains from the heating system. Central heating systems rely on a lot of pressure to keep everything flowing. Once a small portion of the water escapes, the pressure will drop and the leak will stop.

Call a Gas Safe engineer and they will be able to isolate the leak. This could be something as simple as a leaky seal on the boiler pump.

My boiler was leaking, but now it’s stopped. What’s the reason for this?

The most obvious reason for this would be that you’ve turned off the heating. When a heating system is on, you’ll see the pressure gauge creep up. Heat creates extra pressure. The weak spot that is leaking is then exposed.

When you turn off the boiler and the system cools down, the pressure reduces and the leak stops.

There are a few other things to consider:

How much does it cost to fix a leaky boiler?

This is hard question to answer without diagnosing the fault. For example, if the fault is with the filling loop and that filling loop is external, the repair is pretty simple.

A standard external straight combi filling loop will cost less than £20. Including draining down the system and refilling it, the whole process should take less than 2 hours and would be in the region of £95-125 including parts and labour.

On the other hand, the leak could be related to something more serious. For example, the heat exchanger. The cost including parts and labour could be anywhere between £300-500 depending on the brand and model of your boiler.

An engineer has said the pressure release valve has caused the leak, how does this happen?

Check the pressure on your boiler. It should sit between 1.2-2.0 bar (1.5 is normal). If it’s above this there is a good chance the pressure has blown the pressure relief valve. Instead of working correctly, it’s simply leaking water.

A simple fix is to fit a new pressure release valve.

This is fairly uncommon. The boiler has a temperature valve that adjusts its operating temperature.

The temperature probe acts like a sensor. If the probe is damaged it may have allowed the boiler to operate at temperatures that are too high and the excess pressure is forcing water out of the temperature valve.

What if parts have become corroded and have caused boiler leaks, can they just be replaced?

Boilers that are 5 years old are newer should always try and be salvaged if they of good quality. A small leak and the odd corroded part is not the end of the world. The Gas Safe engineer needs to check that the water damage has not spread throughout the boiler.

It would be a shame to replace say, the pump which is causing a boiler leak, only to find a month later the water has found its way into the PCB (£400-500 to repair) and the boiler needs to be replaced anyway.

It looks like the pipework to the boiler is leaking, is this an easy fix?

If the soldered joints have degraded over time causing a leaky boiler, the fix should be straightforward. If it’s because of incorrect pipework, the job gets more complex.

Every Gas Safe engineer needs to ensure pipework is to standard and they may have to adjust the whole set of pipes going to the boiler.

Ready to get your leaking boiler fixed? Old boiler, multiple failing parts and constant repair bills? It might be time to consider a boiler replacement. You can get the most competitive prices on screen from Heatable.