Are Electric Boilers Expensive to Run?

One of the most common questions about electric boilers is how much they cost to run. In this guide, we will explain electric boiler running costs and compare them to those of gas and oil boilers. 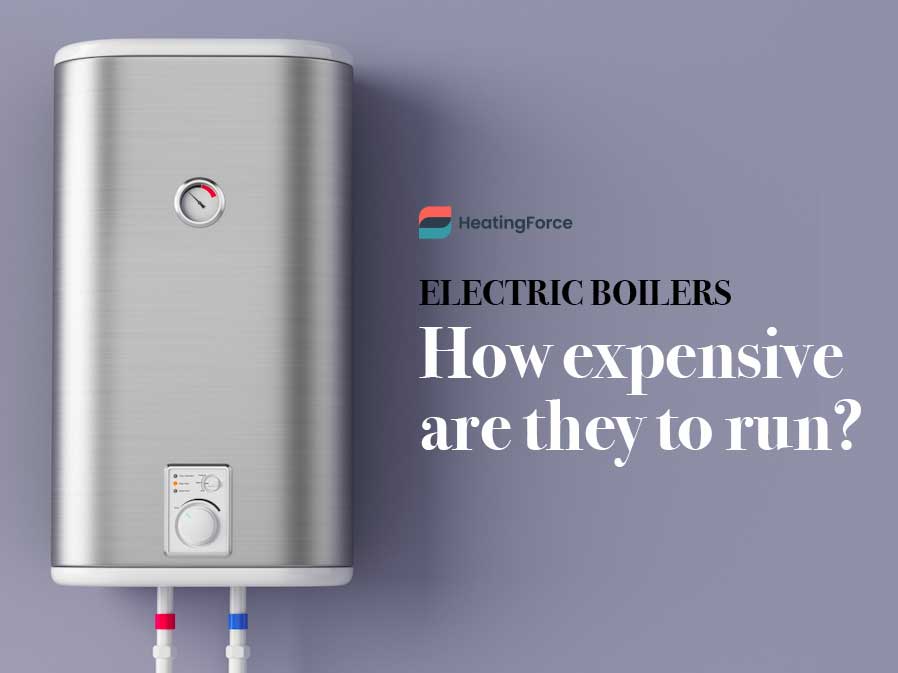 What is the difference between an electric and an oil or gas boiler?

The main difference between an electric boiler and one powered by oil or gas is the fuel. Gas boilers require a mains gas supply, while a home with an oil-powered boiler will need an oil tank somewhere in the garden, and regular deliveries of oil.

An electric boiler runs purely of electricity. As you will see, this has a number of advantages that are vital to a lot of users. The one big downside most people see to electric boilers is the cost of electricity, but this is not always quite as clear cut as it may seem.

Typically, an electric combi boiler will cost about as much as a gas boiler. That said, electric boilers are usually a bit cheaper to install than gas or oil-fuelled boilers.

For this reason, installing an electric boiler usually costs about £1,750, whilst you’ll easily pay £2,000 and up to fit a gas boiler. Of course, these figures are merely an estimate — the true costs will vary depending on a tonne of factors.

Calculating how much an electric boiler will cost to operate is more complex than most people imagine. That’s because there are quite a few variables involved besides fuel costs.

So, to get a reasonable comparison of electric vs gas boiler running costs, let’s consider the following:

There is no denying that electric boiler running costs are higher than those of a gas boiler; at least in terms of the fuel unit rate.

This means that on average, electricity is priced at between two and three times as much as gas, although it should be noted that these costs will vary depending on where in the country you live, and which supplier you use.

Oil prices can fluctuate more because they are tied to international oil prices and these move up and down regularly, as you will have noticed whenever you put petrol in your car.

It is a common misconception that electric boilers and gas or oil boilers consume the same amount of energy. This false impression leads most people to think that the difference in unit costs represents the total difference in running costs.

But this is not the case.

On average, a high-quality electric boiler will consume slightly less than half the energy of an equivalent gas or oil boiler. The following table shows the average consumption of an electric and mains gas boiler in a flat and an average-sized detached house.

This is a significant difference. You will recall that electricity costs per unit are between 2x and 3x higher than gas, so overall, electric boiler running costs are still a bit higher. But with the consumption differential factored in, they’re not higher by too much.

Sure, electric boilers do need to be serviced from time to time. But they have far fewer moving parts than their gas counterparts, so they tend to break down less frequently.

What’s more, electric boilers don’t pose Carbon Monoxide poisoning or explosion hazards, so their maintenance is not as heavily legislated as that of gas boilers. For example, here are some added costs you can expect from your gas boiler:

Now, consider all these extra costs, and the fact that gas boilers use far more energy to produce the same amount of heat. Also, don’t forget to factor in the slightly more expensive installation.

And that’s the big picture — the running cost of electric boiler central heating may not be much more than using a gas boiler in the long term.

On the one hand, electric boilers do not produce any direct emissions. That said, you may notice that electric boilers typically have an ErP (Energy Rated Products) rating of C or D, whilst the less-efficient gas boilers are ErP A-rated.

There’s nothing paradoxical about this. Unfortunately, a good portion of all electricity produced in the UK comes from burning fossil fuels. And this is why seemingly clean electric boilers have such a low ErP rating — CO2 emissions must still occur for an electric boiler to function.

The good news, however, is that renewable energy sources are taking a strong foothold in the UK. And, in less than a decade, it’s entirely possible that the entire electric grid will be powered by “green” electricity.

In case you’re wondering “Are electric boilers any good?”, we’ve prepared a quick summary of the pros and cons of both electric and gas boilers.

There is a number of notable advantages to both electric and gas boilers. Lets have a look below:

Of course, when comparing an electric boiler vs its gas cousin, you must also consider the disadvantages of each boiler type. Here they are:

Should you get an electric boiler vs a gas boiler?

If you live in a small flat, and your heating and hot water demand is low, then an electric boiler will offer you a tonne of advantages. Same story if you live off the gas grid.

You may also want to opt for an electric boiler if you don’t want to deal with frequent service, maintenance, and the risk of Carbon Monoxide leaks on your property.

Keep in mind, however, that getting an electric boiler for the sake of reducing your carbon footprint only makes sense if your electricity supplier is 100% green. Otherwise, you’re still contributing to global CO2 emissions, albeit indirectly.

Now, if you’ve got mains gas and a larger home, with robust demand for both heat and domestic hot water, a gas boiler may still be the better option — at least for now.

And if you want to find an energy-efficient gas boiler at the most competitive price possible, we recommend you take a look at HEATABLE.

HEATABLE has a great range of energy-efficient gas boilers from all the top manufacturers at the lowest possible prices. Just fill in the form on their website (no personal information required) and they will give you a fixed price quote.

Running costs are an important consideration when buying any boiler, especially with electric ones.

As we have explained in this guide, an electric boiler will cost more to run than a gas or oil-powered boiler. But it’s far more complicated than just considering the unit costs of electricity and gas.

In this guide, we have outlined why consumption is another important consideration too and the difference in running costs is far smaller than most people think.

Our general advice would still be to opt for a gas-powered boiler if you want running costs to be as low as possible. But if the other advantages of an electric boiler are appealing, they are well worth considering too and cheaper to run than you might think.