Boiler Plus is new legislation that’s been introduced by the Department For Business, Energy And Industrial Strategy.

The basis behind introducing the new legislation, is to improve energy efficiency in the home, in this case, with boilers. 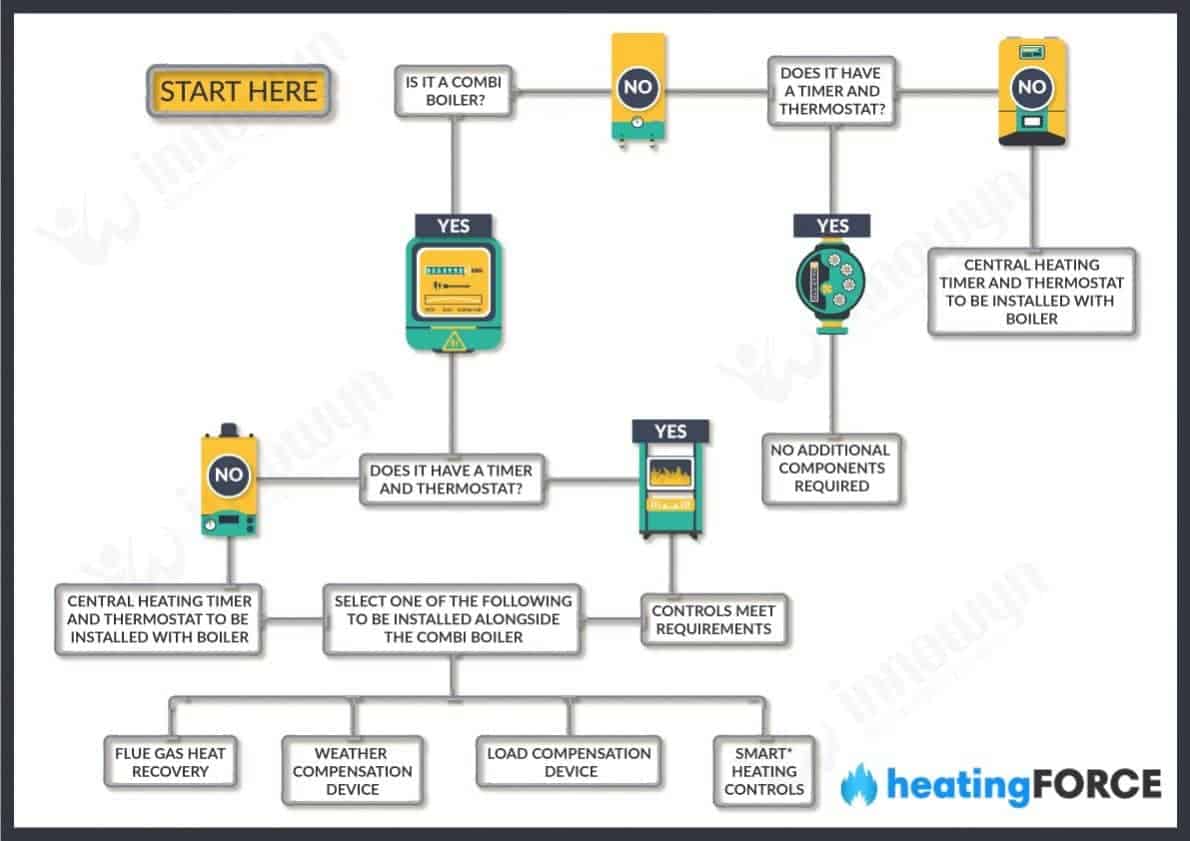 Who Needs To Know About Boiler Plus?

You need to know about Boiler Plus, even if you don’t install boilers.

So, if you’re a homeowner, you’ll want to read this guide too. And, here’s why…

Before we talk about what Boiler Plus is, let’s cover what happens if you don’t comply.

Essentially, it boils down to one thing; big fines.

How Much Are The Fines For Boiler Plus Non-Compliance?

If a homeowner or installer is found to be in non-compliance with Boiler Plus, fines can be issued up to £5,000.

Who Issues The Fines?

The initial fines come from Building Control. And, for installers, the work is likely to then be noted by the Gas Safe Register.

This can then be passed on to Trading Standards, or the Health & Safety Executive (HSE).

Basically, whether you’re a homeowner or an installer, you want to comply with Boiler Plus. You’ll be saving yourself a tonne of hassle.

What Is Boiler Plus?

To comply with Boiler Plus, you’ll need both of the following:

In addition, you’ll also need one of the following:

Smart controls, such as a smart thermostat, are products that are connected, not just to the boiler. For instance, via the internet.

This then gives homeowners the ability to control their heating and hot water remotely via a tablet, mobile, or another connected device.

These aren’t limited to well known brands such as Nest, Hive and Tado. Many boiler manufacturers either have or will be releasing their own smart thermostats that comply with Boiler Plus.

One of the best examples of that, is the Baxi uSense, when fitted with Open Therm and something like the Baxi 600 Compact; that’s a Boiler Plus compliant setup.

A flue gas heat recovery system (FGHR), reuses wasted energy. When a flue pumps out waste gases, that’s the end of their life. But, not with an FGHR in place.

This energy (heat) is reused, helping to improve the efficiency of your boiler.

Some boilers have what’s known as “weather compensation” functionality. Usually, this is based on an outdoor temperature sensor.

And, that’s exactly what a boiler with weather compensation built-in, will do.

Load compensation refers to the flow rate on your boiler. Older boilers have a pre-set flow rate. That means they could be flowing at a rate higher than required at times, wasting energy.

The idea behind load compensation is to monitor flow and return pipe temperatures and adjust the flow rate to suit.

Can I Use Smart Heating Controls, To Boost My Boiler’s Efficiency To 92%?

The use of smart controls to boost a boiler’s overall efficiency, isn’t classed as Boiler Plus compliant.

Whilst you could use a smart thermostat to comply (rather than a flue gas heat recovery system, for instance), the boiler itself still needs to be 92% or higher, in efficiency.

When Did Boiler Plus Come Into Place?

April 2018. That means that all installations on or after these dates need to comply with the above standards.

What Countries Does Boiler Plus Apply To?

As of April 2018, it’s only England that requires boiler installations to be Boiler Plus compliant.

Does My Old Boiler Need To Be Upgraded To Comply With Boiler Plus?

No, the Government aren’t expecting us all to go out and replace our boilers. This applies to NEW gas and oil boiler installations, not existing ones, after April 2018.

If your boiler was installed before April 2018, you’re fine.

Liked our Boiler Plus survival guide? We’d love it if you’d share it.

And, if you’ve got questions, leave a comment below; we’ll reply as soon as we can.