Which University Is Home to The Worst Landlords In The UK?

Students are widely renowned for their laziness, erratic behaviour and wild lifestyles. However, it is fair to say that they tolerate more than we give them credit for.

Student housing across the UK is in a dire state, with complaints spanning from unwanted rodent guests to broken boilers. Therefore it may be unsurprising to some that our new research reveals that a whopping 65% of students have reportedly had a negative experience with a university landlord, and 13% have moved out before their tenancy has ended due to issues.

But which university students have it the worst? Intrigued to find out, HeatingForce analysed more than 44,000 reviews to exclusively reveal which UK universities are home to the worst landlords!

The Universities with The Worst Landlords in the UK

Crowned with the unfortunate title of the “worst student landlords in the UK” was the University of Southampton, which racked up an unimpressive average landlord rating of 2.5 out of 5. 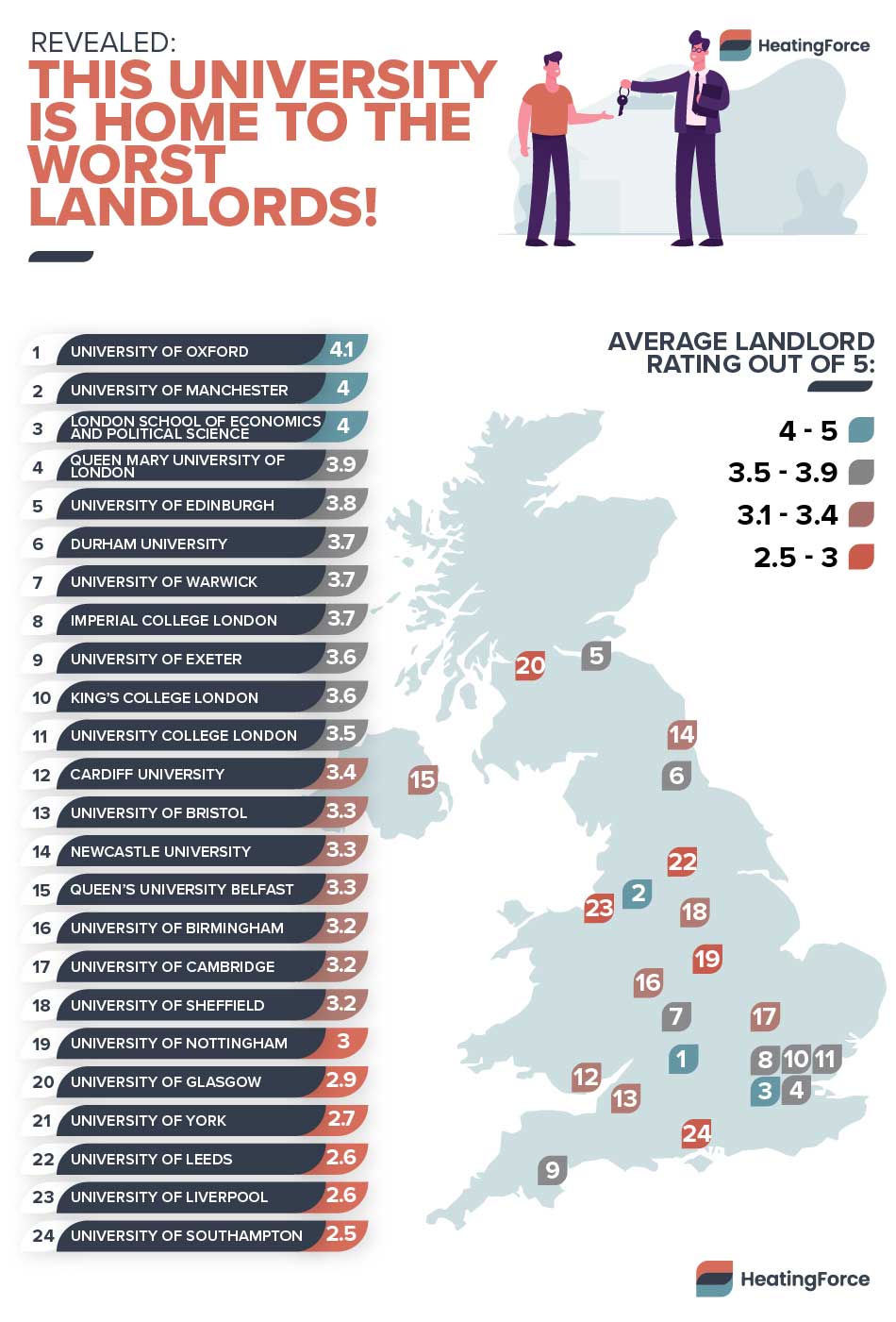 With a high concentration of students in Liverpool’s Wavertree and Smithdown Road, and Leeds’ Hyde Park and Headingley crammed to the brim with old terraced properties, these areas appear to be home to some of the most neglected student properties in the UK.

The University of York appeared to follow suit, with this city home to some of the worst student landlords across the country. Boasting an incredibly poor average landlord rating of 2.7, York’s students fall among the most unhappy private renters in the UK!

The University of Glasgow rounded off the top 5 worst universities to rent privately at. Just falling short of an average landlord rating of 3, the Scottish student hotspot saw their landlords receive a weak score of 2.9 out of 5.

The Universities with The Best Landlords in the UK

Fortunately, not all students are living in poorly maintained properties since some university landlords managed to rack up far more favourable scores.

Ranking first, and home to the best student landlords in the UK, was the prestigious University of Oxford. Renowned for its academic excellence and historic roots, the students of Oxford clearly have very little to worry about when it comes to their living conditions as Oxford’s private university landlords racked up an impressive average landlord rating of 4.1 out of 5!

Shortly behind followed the University of Manchester and the London School of Economics. However, for the rental prices in London, we are not surprised to see LSE’s local landlords receiving a strong average landlord rating of 4 out of 5.

The Most Common Housing Issues Among Students 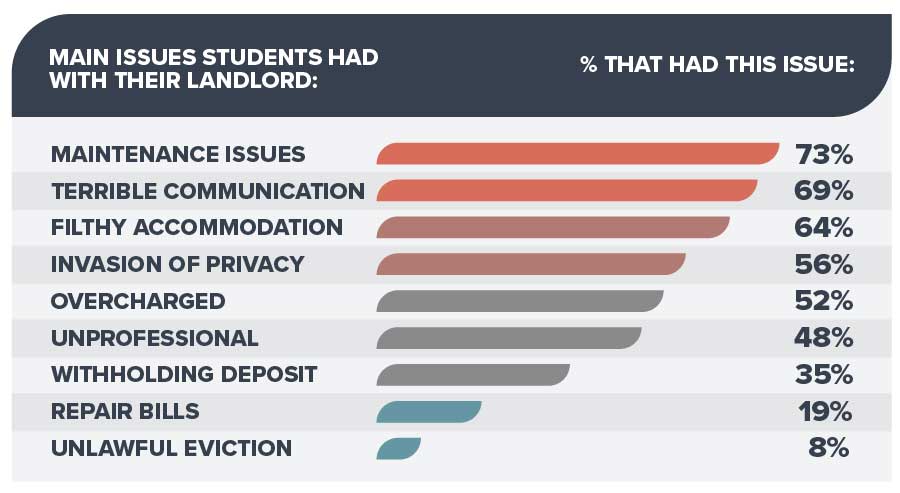 Keen to understand exactly what led certain university landlords to fare so badly in the rankings, HeatingForce sought to uncover the most common housing issues among students in the UK by surveying 1,983 students.

The most reported issue was maintenance, which can mean anything from faulty boilers to broken doors. A staggering 73% of students reported having maintenance issues in our survey, meaning that over 7 in 10 university students are living in a property with some kind of disrepair!

Poor communication was the second most popular complaint students had to make about their landlord, with 69% citing this as one of the main issues they had whilst living in private university accommodation.

A general lack of household hygiene and cleanliness was the next biggest issue. With 64% of students saying that they were forced to move into or live within filthy accommodation, it’s no surprise that some of the university areas with the worst landlords are also most renowned for their rodent visitors!

Other common housing issues include:

However, when over a third of students (38%) admitted to failing to do a thorough background check of their landlord before moving in, it seems there is much more students can do to ensure they avoid living under some of the UK’s worst landlords in the future.

How To Find The Right Student Property

One-third of students feel their university home is poor value for money due to issues with the property or their landlord. To ensure you’re getting the best student accommodation, here are four things to consider before signing a tenancy agreement:

A shared student house is usually a house in multiple occupation (HMO), which is governed by strict rules under the Housing Act 2004. The local authority will set amenity standards, such as the number of bathrooms, toilets, handbasins and sinks, and the size of worktops and fridge space – check that everything is above board.

Furthermore, most shared student homes require a license – make sure you see one before signing the tenancy agreement. It’s a legal requirement for landlords to provide certain documents to tenants, including the gas safety certificate, energy performance certificate (EPC) and deposit protection certificate.

Get a break clause in your contract

For most students, university accommodation is the first time they’ve had to look for a house. With less experience, students are more at risk of being exploited by landlords or agents. By getting a fair break clause in your contract, it ensures you can leave the property if you have to – around six months is the norm.

Work out your budget

In our survey, price was the most important factor for 81% of students when finding university accommodation. Before house-hunting, decide what you can afford and factor in other costs, such as gas, electricity, water, phone, internet and TV license, as well as food and general household items that you need to buy.

When viewing a property, be sure to ask the landlord which, if any, bills are included. Also be sure to ask about any upfront costs – the majority of private landlords will ask for a holding deposit, admin fees, or both.

Think about the location

In our survey, we found that location was deemed the second most important factor for students when house-hunting (78%), followed by amenities (72%), proving just how important location is to students.

When searching for a student property, ask yourself the following questions: how close is the property to university, the gym, the shops, or even nightlife? It’s a good idea to consider transport costs too, if you’re looking at a property further away from university and local amenities.